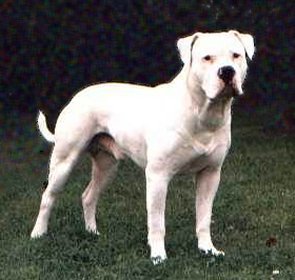 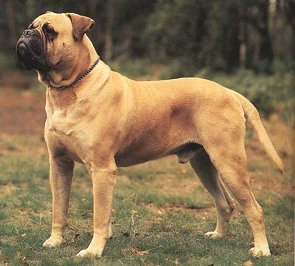 Breed Name: Bull Mastiff
Description: The Bullmastiff shows great strength, endurance and alertness. They are a natural guardian of the home and will not back down from a fight. To strangers they are rather standoffish, but they are loving toward their owner. Bullmastiffs are normally very gentle, cheerful and calm. They make a devoted, gentle companion. They are also known as the "gamekeeper's dog" because they were bred to accompany gamekeepers for the ability to track and overpower a poacher.
Height: 25 - 27 inches
Weight: 90 - 130 lbs.

Colors: Shades of brindle, fawn or red. Slight white marking on the chest is permissible, black muzzle.
Coat: Short, smooth, dense
Temperament: Loving, courageous, loyal; Tolerates children; Should be socialized with other animals at an early age
Care and Exercise: Minimal brushing of his coat. A good rubdown with a rubber brush or massage glove will remove old dead hairs. Nails should be kept short. Diet and daily exercise need to be balanced to prevent obesity. Daily walks or lost of running space is ideal.
Health Issues: Hip dysplasia, gastric torsion and cancer.
History/Origin: Developed in the late nineteenth century by crossing the Mastiff with the Bulldog. He was breed to combine power, speed and a keen sense of smell with the courage and aggression of a bulldog. In 1924 he was standardized and was officially recognized in England.
Category: WorkingRegistries: UCA, AKC, UKC, ANKC, CKC, FCI (Group 2), KC (GB)Living Environment: Outdoor 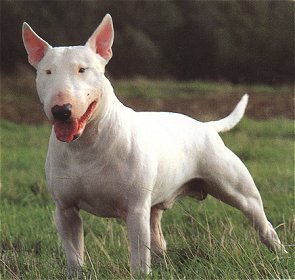 Breed Name:
Bull Terrier
Description:
The Bull Terrier is a loyal, affectionate, loving, and humerous dog. It is strong-willed and, therefore, is not the ideal choice of dog for a first-time dog owner. The ideal owners would be a family that loves horseplay, racing, and games like frisbee. The Bull Terrier has the potential to become a first-class companion dog, but in the wrong hands it can turn out to be a horrid disaster. Height:
20 - 22 inches
Weight:
52 - 62 lbs.

Colors:
Solid white, fawn, brindle, black, red
Coat:
Short and dense
Temperament:
Courageous; good with children when socialized; compatibility with other pets is questionable
Care and Exercise:
Brush coat with a firm bristle brush and bathe only when necessary. Rubbing of the coat will keep it shiny and clean. Needs plenty of exercise, keep on a leash when in public. Puppies need early socialization to prevent them from becoming dominant.
Health Issues:
Hereditary zinc deficiency. Some puppies are born deaf.
History/Origin:
At one time a ferocious fighter, the Bull Terrier was bred aoround 1830 by crossing the English Bulldog with the now extinct White English Terrier. The aim was to get a lighter, more agile fighting dog. They were successful, but by now the breed has become a polite and obedient dog, with an irresistible sense of humor.
Category:
TerrierRegistries: UCA, AKC, ANKC, CKC, FCI (Group 3), KC (GB), UKCLiving
Environment:
Either Indoor or Outdoor
_________________
http://bullbreeds.co.uk